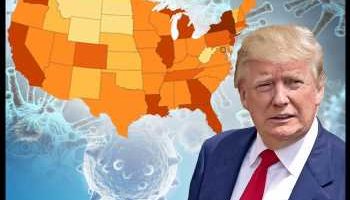 President Donald Trump has said that he hopes the United States will shake off coronavirus by Easter, terming it as “a beautiful timeline.”

Addressing a White House news conference Tuesday, he warned that if the country continues to lock down without business, it could suffer “a massive recession or depression.”

However, looking at the pandemic from a different angle, New York Governor Andrew Cuomo issued a dire warning about the “dramatic increase” in infections in the state despite a stay-at-home order.

“One of the forecasters said to me we were looking at a freight train coming across the country. We’re now looking at a bullet train, because the numbers are going up that quickly,” he told reporters.

New York, the worst-affected U.S. state, accounts for about half of the country’s coronavirus cases with 271 deaths and 26,348 cases of infection. Nearly half of them are in New York City.

The Senate agreed to a $1.8 trillion economic stimulus package put forward by the Trump administration.

On Tuesday, Iowa reported its first COVID-19 death, adding to the national death toll of 783 and 54,941 cases that tested positive.

A quarter of the world’s population is now living under some form of lockdown.

The death toll in Spain has overtaken that of China, rising by 738 to 3,434. It is now second only to Italy, where a total of 6,820 people have died due to COVID-19, according to Johns Hopkins University.

British parliament is expected to close on Wednesday evening after emergency powers are passed.

India’s 1.3 billion people went into lockdown Wednesday after its Prime Minister announced a ban on leaving homes for the next 21 days.