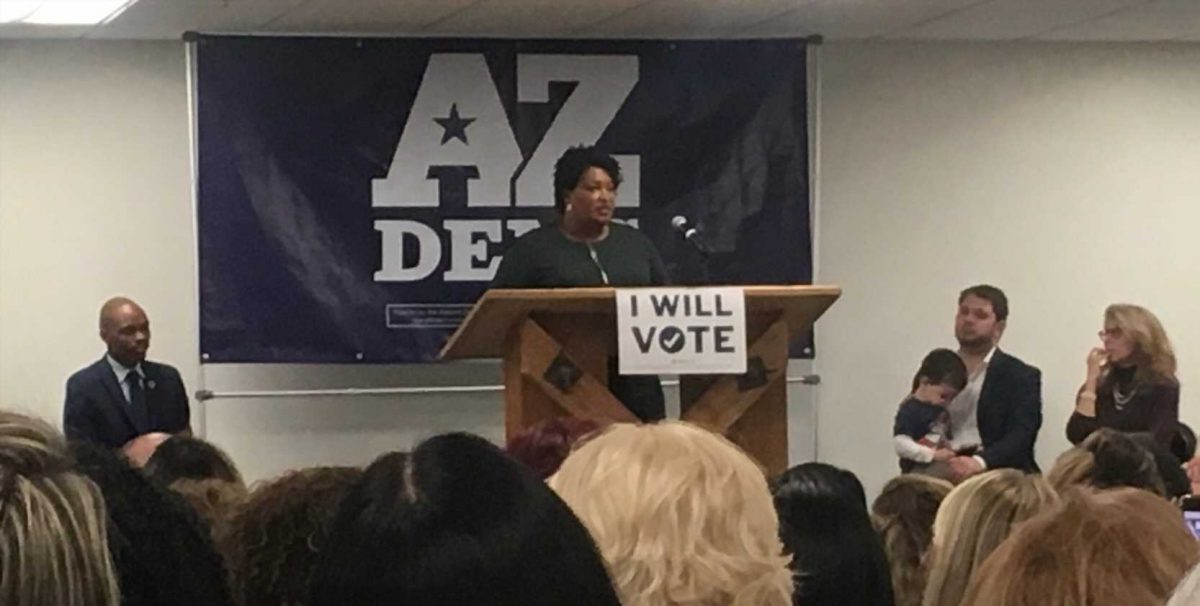 PHOENIX ― Even as Donald Trump’s campaign boasts about “expanding the map” this year to win Minnesota, Oregon and New Mexico ― states he lost in 2016 ― the president recently found himself campaigning to hold the home state of Barry Goldwater, John McCain and Sandra Day O’Connor.

“We love to be back. We will be back a lot,” Trump promised a roaring crowd of 15,000. “And with your help this November we are going to defeat the radical socialist Democrats, and we are going to win Arizona in a landslide.”

Yet Trump’s very presence at the Veterans Memorial Coliseum at the state fairgrounds suggests that outcome is by no means guaranteed ― particularly in an increasingly Latino state where a Democrat in 2018 won a U.S. Senate seat for the first time in 24 years and another one took the key secretary of state’s post.

Trump campaign spokesman Tim Murtaugh has in the past said that the most valuable asset in the reelection bid is the president’s time ― he made that point to argue that Trump’s presence in Minneapolis last autumn was proof he had a chance of winning Minnesota. But he insisted Trump’s visit to Phoenix does not mean the president is in danger of losing Arizona.

“You also have to campaign where there is strong support to keep people engaged and show them that the president is fighting for them,” Murtaugh said.

Democrats and other Trump critics who describe the record midterm election turnout 14 months ago as a response to his tone and policies say that energy has not subsided, and this November will see them deliver Arizona and its 11 electoral votes to the Democratic nominee for the first time since 1996.

“We are seeing it as definitely within reach,” said Emily Kirkland, head of the group Progress Now Arizona. She terms the state “eminently flippable.”

And while Trump’s visits clearly excite his hard-core base, Democrats say they also energize those who will work hard to turn him out of office.

“It certainly is a great way to begin a conversation with a Latino family,” said Edder Díaz-Martínez, a 29-year-old organizer who was brought into the country illegally from Mexico when he was 5 and is currently protected under a program started by former President Barack Obama.

Díaz-Martínez said that when Trump attacks immigrants as drug dealers and murderers at his rallies and reiterates his pledge to build a wall along the southern border, he and other Mexican immigrants take it personally.

“It seems like we’ve been targeted. It seems like he’s had it in for us from the very beginning,” Díaz-Martínez said – which, he added, has made it easier to persuade Latinos to turn out and vote. “It’s really just a great way to bring it home to them.”

Turning Arizona Blue Thanks To Trump

Barely 24 hours after and four miles down the road from where Trump took the stage for his rally, hundreds of Maricopa County Democrats filed into a carpenters union hall to hear a voice that state party leaders say will help energize an even bigger Democratic turnout this November.

“What you all accomplished here in 2018 was to change the face of Arizona,” said Stacey Abrams, the former Georgia House minority leader who lost a close and controversial race for the state’s governorship to then-Secretary of State Brian Kemp (R). “Our time is now, Arizona. So let’s get it done.”

Democrats’ optimism for this year is understandable. Since Trump began seeking the White House, Latinos have become more active voters, while the suburbs of major cities have started to swing more Democratic.

In November 2016, with both sides largely ignoring Arizona until the final weeks before the election, the state’s voters gave Trump a 3.5 percentage point win over Hillary Clinton. That was the closest a Democrat had come to winning the state since Bill Clinton carried it in his 1996 re-election. He won it by 2 points, aided by third-party candidate Ross Perot siphoning off votes that otherwise would have gone to Republican Bob Dole. 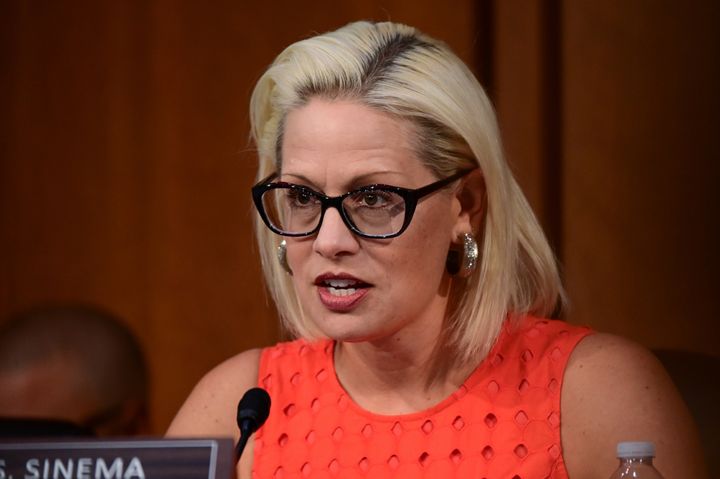 The 2018 midterms gave Arizona Democrats one of their best elections in years, with large increases in both youth and Latino participation powering statewide turnout to a presidential-year level of 65%. That produced big gains for the party in the state legislature, as well as a U.S. Senate seat for then-Rep. Kyrsten Sinema.

“The new American electorate,” said Felecia Rotellini, chairwoman of the Arizona Democratic Party, who introduced Abrams at her appearance. “Those are the folks who got engaged in 2018 and will remain engaged in 2020.”

“Democrats are obviously emboldened,” said pollster Mike Noble of OH Predictive Insights in Phoenix. He added that he expects both sides to pour money into the state to win in November, particularly with a key Senate race again on the ballot.

“People used to just kind of check the box when it comes to us. Now it’s really a battleground,” Noble said.

Indeed, Trump’s presidency appears to have accelerated the already increasing rate of Latino participation, Noble said, as well as helped Democrats make big inroads among suburban women in Arizona, just as they have around the country. “I wouldn’t be surprised if that trend continues,” he said.

Heading into November, Democrats also have on their side one tool they lacked as the 2018 midterms approached. In addition to picking up the Senate seat and coming within striking distance of flipping both chambers of the state legislature, they also won the office of secretary of state, the official who administers elections.

Katie Hobbs is already serving as a counterweight to Republicans who control the state legislature and the governor’s mansion. Earlier this year, she announced that she would break with the rest of the executive branch over a lawsuit challenging a law making it harder for activists to collect and deliver absentee ballots.

“I will continue to condemn any efforts to create unnecessary barriers to voting, especially when those obstacles are based on hyperbolic fears,” Hobbs said.

Abrams, speaking to reporters after her recent speech in Phoenix, said Hobbs “understands that her job is to protect the right to vote. Not so that she can game the system, but so that she can ensure that democracy works for everyone, and I think that’s why Democrats are going to win. Because she’s going to make sure that every voice can be heard, and when that happens, Democrats tend to win.”

Whether Democrats can use voter anger toward Trump to help fuel a large turnout again and whether Trump’s efforts to energize his own base can counter that are great unknowns eight months from Election Day. But the biggest wild card in the race may lie in a squat one-story building in downtown Phoenix.

On Jan. 3, multi-billionaire and former New York Mayor Michael Bloomberg opened the doors to what became headquarters to a total of seven field offices around the state with 51 total paid staff to help his last-minute run for the presidency.

Bloomberg dropped out of the race after poor finishes in Super Tuesday primaries this week, but unlike most campaigns ― which close offices and lay off staff quickly ― Bloomberg has committed to keep his team active to help defeat Trump.

In Arizona, that means continuing efforts to organize Latino voters, a group that historically has not registered or turned out in numbers proportionate to its population.

“The Latino community here has been taken for granted for a long time,” said Luis Acosta, Bloomberg’s state director who, like much of his Arizona staff, is actually from the state, rather than having recently rolled in from Iowa or New Hampshire.

Acosta said the work has involved going into Latino neighborhoods, recruiting volunteers and making the kind of community connections that most statewide campaigns have neither the time nor the money to attempt.

“There’s no reason we can’t awaken the sleeping giant here in Arizona,” Acosta said, referring to the potential political clout Latino voters could have. “The Republicans here locally understand that. And they are worried.”

Bloomberg showed in 2018 that he was willing to spend his own money to help Democrats, including $56 million on negative ads against 24 Republican House candidates across the nation in the campaign’s final weeks. Democrats won 21 of those races, helping Nancy Pelosi become speaker.

This year’s effort in Arizona, as well as in five other swing states, would also include registering and turning out infrequent voters.

“The scale of the operation is impressive,” said Progress Now Arizona’s Kirkland. “It’s amazing what unlimited money can buy.”

As to awakening the “sleeping giant” of untapped Latino voters, Kirkland said her group and others have been working in those fields for years, and the higher turnout rate in 2018 show that those efforts already have started to work. “Which is not to say I don’t welcome their help,” she laughed.