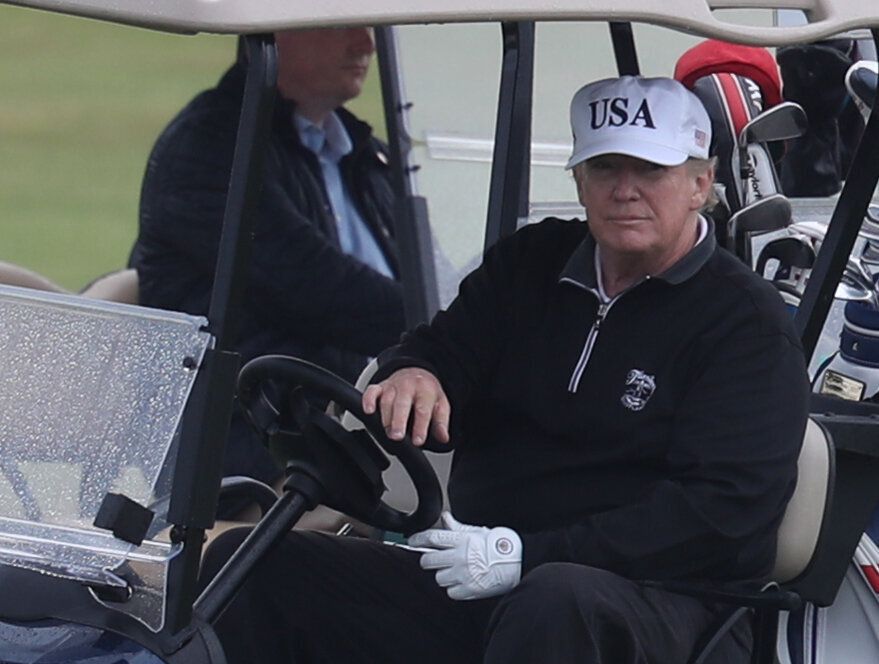 President Donald Trump owns three golf resorts in the European countries he has spared from his travel ban.

Foreign nationals from all 26 countries of the Schengen Area, which make up most of Europe, will be barred from entering the U.S. for at least 30 days as protection against the spread of coronavirus, Trump announced Wednesday. The United Kingdom and Ireland are not part of that group, but they do have cases of coronavirus — and Trump golf resorts.

Trump said Thursday that he exempted the U.K. from the travel ban because he believes conservative Prime Minister Boris Johnson is doing a “good job” battling coronavirus. But several health experts disagree with Trump’s assessment.

Trump’s decision is “clearly not based on science,” Jeremy Konyndyk, a Center for Global Development fellow who helped the U.S. deal with the Ebola crisis, told Foreign Policy magazine.

Johnson has been attacked for being slow to take action to stop the spread of the illness, such as shutting down large gatherings to head off widespread contagion.

Johnson declared on Britain’s “This Morning” TV program on Tuesday that one coronavirus “theory” is that people should “take it on the chin” and allow the disease to “move through the population.” But, he added, “I think we need to strike a balance.”

Richard Horton, the editor in chief of the medical journal The Lancet, accused Johnson of “playing roulette with the public” by taking his time instituting changes.

In a marked change of tone, however, similar to that exhibited by Trump,  Johnson said Thursday that the virus threatens the “worst health crisis in a generation” and that “many more” people will die. But he wasn’t quite prepared to stop major sporting events.

Though Italy and France have far more cases of coronavirus, 590 cases were reported Thursday in Britain — a 30% jump from the previous day. The chief health officer of the U.K. believes as many as 10,000 people could already be infected.

Ten people have died of the illness there. Ireland reported its first death Wednesday and is canceling St. Patrick’s Day celebrations this year.

Trump blamed the European Union for exporting cases to the U.S., a strategy some critics said was intended to deflect criticism from his administration.

As president, Trump has frequently showcased his golf resorts in Scotland and Ireland, which have struggled financially. He took an entourage to Doonbeg after a state visit with Queen Elizabeth II last year. Vice President Mike Pence went three hours out of his way to stay at Trump’s resort in Doonbeg last year, even though he had traveled to Ireland to meet with the nation’s prime minister in Dublin. The U.S. Air Force spent nearly $200,000 at Trump’s Turnberry resort for lodging during refueling stops at a small airport near the resort.