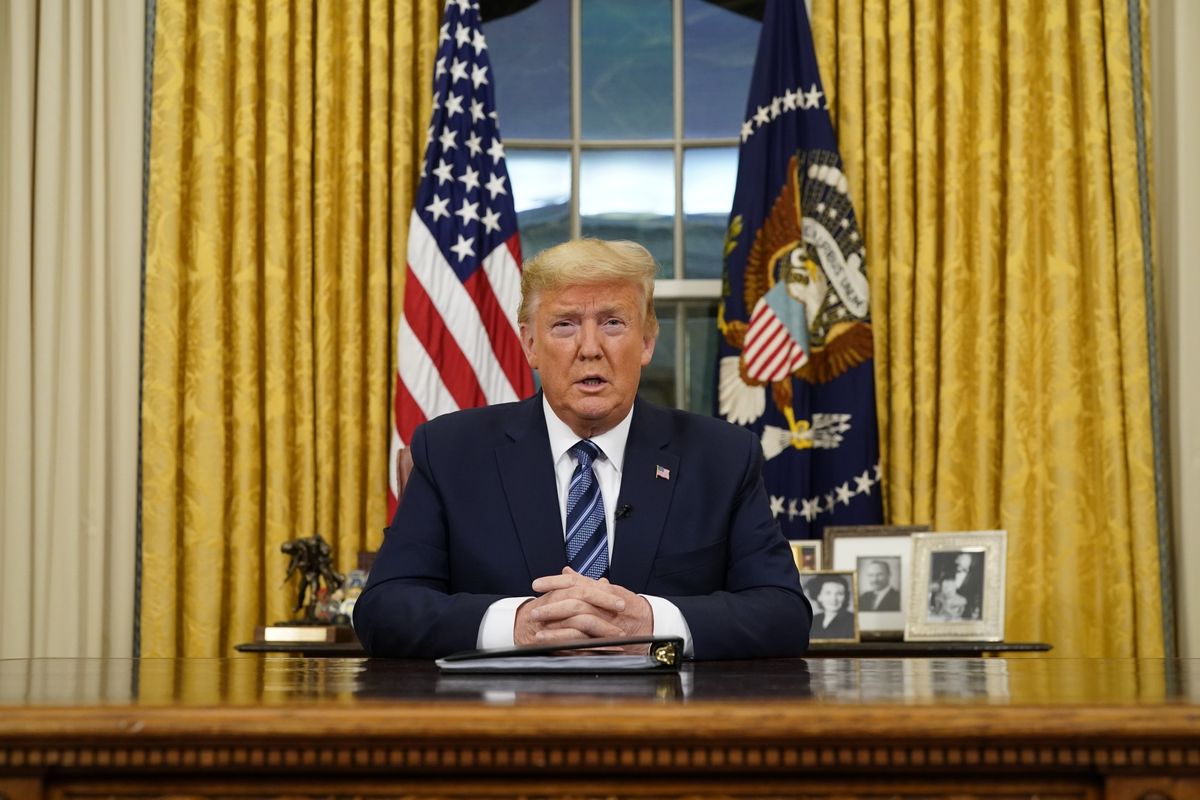 President Donald Trump said he doesn’t support House Democrats’ package of measures to respond to the coronavirus in its current form, even as his treasury secretary is negotiating changes with Speaker Nancy Pelosi.

While the president objected to Democratic “goodies” in the bill, the White House and Republicans in Congress had their own objections, including demanding assurances that no federal money would be used to fund abortions, according to two people familiar with the issue.

The package of measures introduced by Democrats Wednesday night includes emergency paid sick leave, enhanced unemployment benefits, and free coronavirus testing. The House plans to vote on the package Thursday, and both chambers of Congress are planning to leave Washington Thursday for a week-long recess.

“There are things in there that have nothing to do with what we’re talking about,” Trump told reporters during an appearance with the Irish prime minister. “So, it’s not a way for them to get some of the goodies that they haven’t been able to get for the last 25 years.”

Pelosi spoke with Treasury Secretary Steven Mnuchin three times Thursday morning to discuss changes that the White House wanted to see in the bill. Before Trump weighed in, Pelosi had told reporters that Mnuchin’s changes were “very reasonable.”

The House proposal is the only viable bill that has been introduced in Congress this week to deal with the coronavirus, and it will either be a partisan opening bid in talks with the Senate or a bipartisan compromise that actually has a chance to become law.

“We’re here to pass a bill. When we pass a bill we will make a judgment on what comes next,” Pelosi told reporters. She gave no indication that she would keep Congress in session past Thursday, declining to comment on “travel arrangements.”

“Let us get this bill passed first,” Pelosi said.

House Republican Leader Kevin McCarthy told reporters he opposes the Democrats’ proposal but wants to stay in Washington for another day or two to work out an agreement. Congress should try to do now what Republicans and Democrats can agree on and put off “bigger things” for later, he said.

“I believe there are big things that will take more time,” McCarthy said. “Let’s do what we can do together right now. We can work on the big things” in the next few weeks. “It is critical that we get a small portion of this done right now.”

McCarthy also said the estimated $50 billion increase for federal Medicaid in the Democrats’ bill should be left out for now.

One of the main sticking points for Republicans in the Democrats’ bill is the requirement that employers provide paid leave, according to South Dakota Senator John Thune, a member of Republican leadership.

“That’s something being discussed between House leadership and the White House,” Thune said. “If you mandate on employers paid leave that’d be a hard sell.”

McCarthy and others said there should be an option to exempt some businesses from a paid leave mandate, and that such a measure should include a sunset clause.

Republicans also said assistance for workers should be administered through a tax credit, similar to the employee retention credit used during other disasters, according to a GOP aide.

House Rules Chairman Jim McGovern, whose committee is responsible for preparing bills for a floor vote, said the Democratic package is on hold, waiting for changes as negotiations with the Republican-led Senate continue. The Massachusetts Democrat said the talks are ”tightening up some stuff on family leave,” and while he’s hopeful that there can be a bipartisan agreement, House Democrats are prepared to act even if Republicans don’t get on board.

Senate Majority Leader Mitch McConnell all but rejected the House bill, saying in a floor speech Thursday morning that the Democratic proposal is “an ideological wish list that is not tailored to the circumstances.” He said Pelosi’s proposal “would stand up a needless thicket of new bureaucracy” in the Social Security Administration that would delay delivery of aid to those who need it and put unfunded mandates on businesses.

If House Democrats pass their bill Thursday, that will put pressure on the Senate to come up with a more specific counter-proposal. Republicans thus far have largely advocated for waiting to more fully understand the economic consequences of the global health crisis before proposing their own fiscal measures.

Trump, in his Oval Office speech to the American people Wednesday night, asked Congress to cut the payroll tax, but even Republicans in Congress have been cool to that idea, and McCarthy said measures like that could come later if needed.

— With assistance by Saleha Mohsin