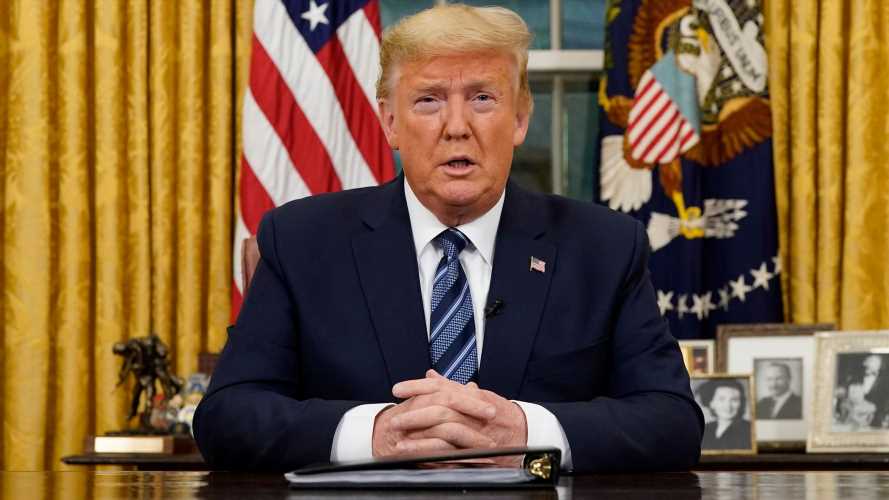 WASHINGTON – A day after President Donald Trump retreated again to his comfort zone of banning foreigners from the country, his administration still cannot explain the ongoing inability to test large numbers of Americans for coronavirus or share whether there is a plan to address a potential shortage of acute-care hospital beds.

“We’re in great shape. Compared to other places, we are in really good shape, and we want to keep it that way. That’s why I did the ban with respect to Europe,” Trump said during a White House photo opportunity with the visiting prime minister of Ireland, the day after imposing a 30-day ban on most Europeans entering the United States.

But neither Trump nor his top administration officials addressed the continuing difficulty Americans around the country face in getting a test for the coronavirus. Nor was there discussion about what happens if the number of serious cases spikes — as happened in China, Iran and Italy — and outstrips the number of intensive-care beds available.

Indeed, on Capitol Hill, the widely respected head of the infectious diseases program at the National Institutes of Health conceded that coronavirus testing has been a failure.

“This is a failing. It is a failing. Let’s admit it,” Anthony Fauci told members of the House Oversight Committee. “The idea of anybody getting it easily the way people in other countries are doing it, we’re not set up for that. Do I think we should be? Yes. But we’re not.”

Trump’s likely Democratic opponent this November took the opportunity to call for increased immediate testing, as well as the deployment of temporary hospitals for patients with COVID-19, the disease caused by the virus.

“By next week the number of tests should be in the millions, not the thousands,” former Vice President Joe Biden said in a prepared speech from Wilmington, Delaware. “We can do that, but we are not ready yet, and the clock is ticking.”

Biden also criticized Trump for dismantling the pandemic response team created by former President Barack Obama, for whom Biden served. “It was designed for exactly this scenario. But for some reason I still don’t understand, President Trump eliminated … that office two years ago,” Biden said.

Trump has made it one of his top priorities to undo as many of Obama’s accomplishments as possible, but he claimed during a news conference last month that he took the action because he did not like having people on staff when they weren’t immediately needed. “We know all the people. We know all the good people,” Trump said. “Some of the people we cut, they haven’t been used for many, many years. And if ― if we have a need, we can get them very quickly.”

That assertion is but one of a number of misleading claims and outright falsehoods Trump has made during the crisis, as he continues his lifelong habit of lying to make himself look good, even on a matter that affects the lives of hundreds of millions of people.

For weeks, Trump downplayed the danger the virus posed, suggesting that the seasonal flu was worse and claiming it would go away by itself come April. He even called news coverage about it another “hoax” designed to tank the stock markets and damage his reelection chances.

On March 6, he claimed — falsely — that the delay in getting coronavirus testing kits available was the fault of rules passed under Obama. Two days later, on a visit to the Centers for Disease Control and Prevention in Atlanta (during which he wore a campaign hat), he ran through a string of falsehoods about the disease, including the claim, “Anybody that wants a test can get a test.”

His 11-minute speech from the Oval Office on Wednesday night was similarly an exercise of claiming great success, rather than in laying out a detailed plan, apart from a new travel ban.

Trump during his 2016 campaign called for a complete ban on Muslims from entering the United States. As president, that became a travel ban from a number of mainly Muslim countries. When the coronavirus appeared as a new epidemic in China, Trump responded in late January by banning foreigners who had been there — even though many health experts said the effort could not effectively block a virus as contagious and with as long an incubation period as this one.

Trump nevertheless on Wednesday declared a new ban on foreign nationals from countries in the Schengen Area, which permit free travel across their borders without passport control — a distinction that excludes the United Kingdom, Ireland, Croatia, Bulgaria and Romania.

The logic of this was not entirely clear. The United Kingdom has more cases of COVID-19 — including its own health minister — than a number of countries in the Schengen zone. However, the United Kingdom and Ireland both have Trump golf resorts.

During the Oval Office photo opportunity, Trump claimed the U.K. exemption had do with Britain’s performance keeping out the virus. “It’s got the border. It’s got very strong borders. And they’re doing a very good job. They don’t have very much infection at this point. And hopefully they’ll keep it that way,” he said.

Trump has long railed against free movement across national boundaries, and was a proponent of the Brexit referendum that led to the United Kingdom’s departure from the European Union earlier this year. But free movement is still permitted between the Schengen countries and the U.K. during a year-long transition period notwithstanding Trump’s assertion about “borders.”