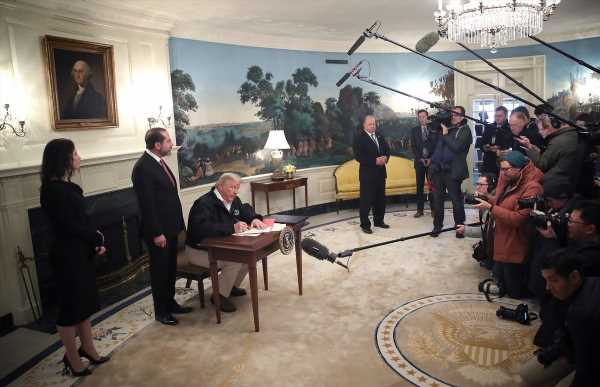 President Donald Trump signed a $7.8 billion emergency coronavirus spending bill on Friday after the number of infections continued to rise and stocks tumbled.

The amount of money provided in the legislation far exceeds Trump’s original request — $1.25 billion in new funds and another $1.25 billion from other government social and health programs. Lawmakers said they expect Congress will have to provide more emergency funding before the virus outbreak subsides.

Trump’s signature came as the number of infections in the U.S. topped 200, according to data compiled by Johns Hopkins University. There have been 14 deaths, mostly in Washington state.

“It’s an unforeseen problem,” Trump told reporters after signing the bill on Friday. “Came out of nowhere.”

The S&P 500 fell more than 3% on Thursday, erasing the majority of Wednesday’s steep gains. The benchmark has had the most volatile week since S&P Global Ratings cut the U.S. debt rating in 2011.

The measure reimburses state and local governments for the cost of preparing for and fighting the virus. It includes $3.1 billion to stockpile medical supplies and $300 million for government purchases of tests, vaccines and therapies to ensure that low-income people have access.

Another $1.25 billion will be directed to combating the spread of the virus overseas, and a provision unlocks as much as $7 billion in low-interest loans to small businesses affected by the outbreak.

Lawmakers spent much of this week negotiating over how to make a coronavirus vaccine affordable for Americans. The bill seeks to ensure that the federal government pays a fair price for vaccines, and it allows the Health and Human Services secretary to regulate the commercial price. Democrats had initially sought a stricter price cap.

Kentucky Republican Rand Paul was the only Senate vote against the measure. He unsuccessfully pushed an amendment that would cut foreign aid to pay some of the bill’s cost. The emergency measure is financed through deficit spending.