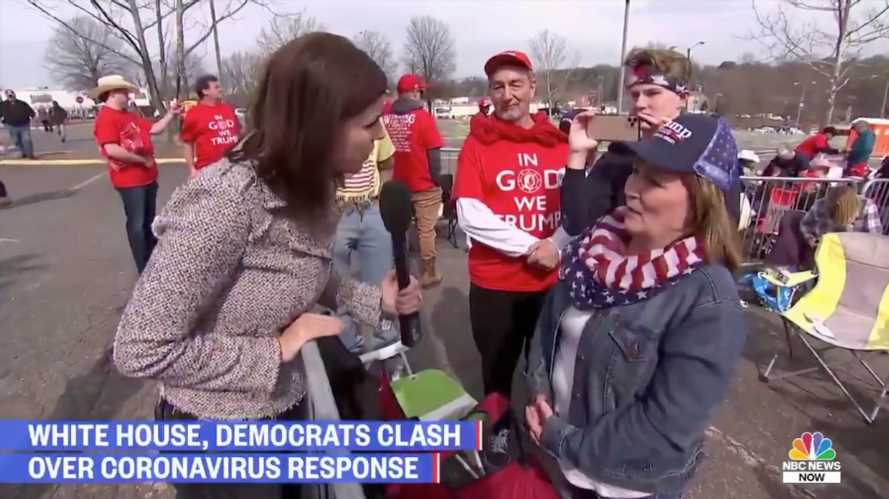 It seems that President Donald Trump’s claims that Democrats are “politicizing” the deadly coronavirus spreading around the world and that criticism of his administration “is their new hoax” are resonating with many of his supporters.

A handful of attendees at Trump’s campaign rally on Monday night in North Carolina told NBC News reporter Monica Alba they weren’t worried about the illness that has sickened at least 80,000 worldwide and killed about 3,000. Others said they doubted the novel coronavirus even exists.

A person who was “very pleased” with Trump’s handling of the outbreak echoed the president’s claim that the media is inciting “fear and panic.” Another said she doesn’t “trust anything the Democrats do or say,” another of Trump’s contentions about the virus.

Trump and his White House have repeatedly downplayed the threat of the illness, called COVID-19. But the president himself has gone even further, suggesting it shouldn’t be taken seriously.

During a South Carolina rally over the weekend, Trump told the crowd: “Now the Democrats are politicizing the coronavirus. They have no clue, they can’t even count their votes in Iowa.” He likened Democrats’ criticism to his impeachment, saying “this is their new hoax.”

Not everyone in Trump’s North Carolina crowd accepted the president’s assurances. Some told Alba they had second thoughts about attending because of the virus.

The Trump administration has been widely criticized for spinning the sickness as a partisan issue. The U.S. has at least 102 confirmed coronavirus cases, and six patients have died.

Trump also has shown questionable leadership with false information. He promised on Monday that “very exciting things are happening rapidly” in preparing for an outbreak and cited a possible “quick” vaccine.

A top government expert on Trump’s COVID-19 task force quickly contradicted that, saying a vaccine may be ready in 18 months.

Infectious disease expert Matt McCarthy, a Manhattan hospital physician, said on Monday night’s CNBC’s “Squawk Box” that he’s had to “plead” for COVID-19 testing for patients because of a federal government logjam.

“There are going to be hundreds by the middle of the week; there’s going to be thousands by next week,” said McCarthy. “And this is a testing issue.”

McCarthy also cautioned people to “not believe” the “false reassurances” coming from the Trump administration.