DALLAS – Conservative political commentator and Michigan gubernatorial candidate Tudor Dixon faces a potentially stacked GOP primary field if she wants to take on Democrat Gov. Gretchen Whitmer in 2022, but she’s been busy building an apparatus she believes can earn the GOP nomination.

That work continued over the weekend at the Conservative Political Action Conference (CPAC), where she met donors and aimed to build grassroots support with her Saturday address on the future of conservatism.

“A successful weekend honestly is just to bring any money in right now. This race is going to be a very expensive race,” Dixon told Fox News. “We’ve already had quite a few donors commit to us, that’s a huge deal in a race against someone like Gretchen Whitmer who has so much support. She was just given another nod by President Biden.”

A Michigan Republican insider compared Dixon’s work at CPAC this year to John James’ appearance at the conference in 2018 as he built support for his first of two U.S. Senate runs. James was later endorsed by the American Conservative Union (ACU), which puts on the CPAC conference, and won a close primary.

James lost the 2018 general election against Sen. Debbie Stabenow, D-Mich., in what was a tough year for Republicans, and in 2020 came extremely close to unseating Sen. Gary Peters, D-Mich. But James nevertheless gained a lot of credibility with national Republicans in the process.

“We have not made a decision on an endorsement yet, but we think she is a fantastic new candidate who has an important voice,” ACU President Matt Schlapp told Fox News when asked about comparisons between James in 2018 and Dixon in 2021.

“I think the voters of Michigan want a fresh perspective after near suffocation from the socialism and hypocritical dictates from the reigning governor,” Schlapp added.

The Michigan Republican insider noted that CPAC could be a “big stepping stone” for Dixon as she aims to build her political apparatus. She recently added some new hires, including heavy hitters from Trumpworld.

Among them are Taylor Budowich, an adviser to Donald Trump Jr., and Kimberly Guilfoyle; Susie Wiles, who runs Trump’s post-presidency political operation; and general counsel Charlie Spies, who is a veteran of John James’ Senate races and Florida Gov. Ron DeSantis’ 2018 race.

The primary for Dixon, however, is likely to be far from a slam dunk. A commentator for the conservative Real America’s Voice, Dixon does not have the kind of name recognition as James and Republican National Committee Chair Ronna McDaniel, both of whom are speculated about as potentially entering the race. Already running are lower-profile candidates Austin Chenge and Garrett Soldano. 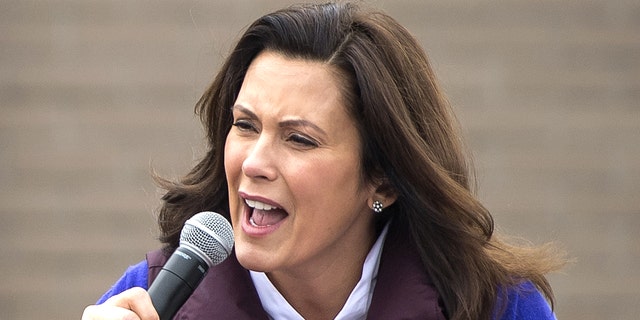 Another hurdle Dixon could face is the fact Michigan has drifted to the left since former President Trump’s 2016 victory there, going blue for U.S. Senate and presidential elections in 2018 and 2020. All of Michigan’s top statewide officials are Democrats too. It’s not clear how Dixon’s staunch support of Trump would play in a 2022 race.

But the Michigan political insider cautioned that Dixon has more depth than just her support for Trump. And the candidate herself said she believes the effects of Trump’s policies combined with dissatisfaction with Whitmer could make 2022 a very winnable election for her.

“I’ve supported many of Trump’s policies that have helped Michigan. A lot of the things Trump did came through to help Michigan in a really positive way,” Dixon told Fox News. “We have the USMCA (United States-Mexico-Canada Agreement). We also have amazing support of our minority communities. That’s something that is really winning over Michiganders.”

Dixon added: “Bringing back businesses but also giving our children choice in education… It’s absolutely possible and I believe it will happen that we will be able to win that nomination and beat Gretchen Whitmer.”

Fox Nation was a sponsor of CPAC 2021: America Uncanceled.