Rep. Tulsi Gabbard (D-Hawaii) dropped out of the 2020 Democratic presidential primary race on Thursday and offered her “full support” to former Vice President Joe Biden in his bid for the White House.

Gabbard’s announcement comes as the coronavirus pandemic drastically changes the presidential race and other 2020 campaigns. The leading Democratic candidates — Biden and Sen. Bernie Sanders (I-Vt.) — have been forced to suspend typical campaign fixtures such as rallies and door-to-door campaigning as cases of the disease have been reported in all 50 states.

But Gabbard lagged behind much of the crowded 2020 field in polling over the past year, failing to win even 1% of the vote in Iowa or New Hampshire, the first two states to hold primaries.

She had a meager showing on Super Tuesday, the most important day of the Democratic primary race. Her most successful contest was in American Samoa, an unincorporated U.S. territory where she was born.

With roughly 29% of the support, she finished a distant second in the territory’s caucuses, behind former New York City Mayor Michael Bloomberg, who garnered about 50%. Bloomberg ended his presidential bid a day later.

Gabbard exited the race having only won two delegates.

The Hawaii representative was the only member of the House to vote “present” on the two articles of impeachment during the December vote to impeach President Donald Trump. She later explained that she “could not in good conscience vote either yes or no” on the two articles.

In the days after the historic vote, former Hawaii Gov. Neil Abercrombie urged Gabbard to resign her congressional seat. Abercrombie, a Democrat who served nine terms in the House from 1993 to 2010, expressed concerns that Gabbard had been unable to juggle her responsibilities as a member of Congress and her presidential campaigning.

Abercrombie pointed to Gabbard’s “present” votes and frequent absences from the Hill as examples of this imbalance.

Gabbard also clashed with Hillary Clinton shortly before a Democratic primary debate in November. The former secretary of state suggested the congresswoman was being “groomed” by Russia. In response, Gabbard filed a defamation lawsuit against Clinton, alleging the 2016 Democratic presidential nominee lied about Gabbard “with obvious malicious intent” to hurt her 2020 presidential campaign.

During the November debate, Democrats piled on Gabbard over her support for nationalist and authoritarian foreign leaders, including Egyptian President Abdel Fattah el-Sisi and Syrian dictator Bashar al-Assad, as well as her close ties to Fox News, Trump’s favored news network. 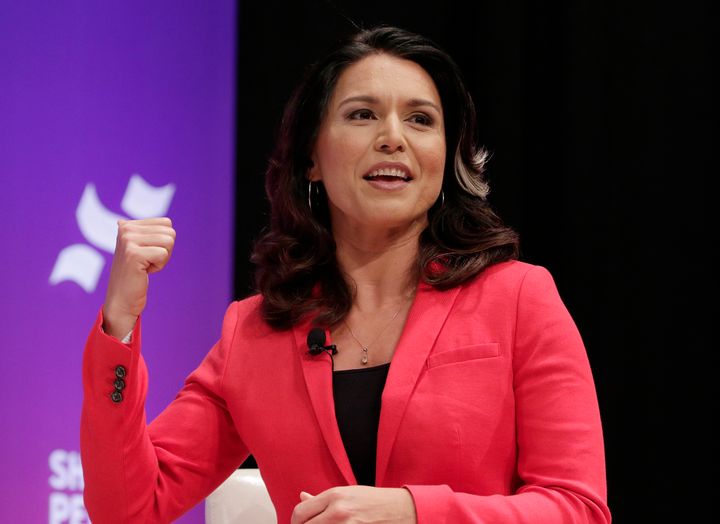 Gabbard did two tours of duty in the Middle East and is currently a major in the National Guard. She went on to serve on the Foreign Affairs Committee and the Armed Services Committee for over six years. Gabbard was also the vice chair of the Democratic National Committee until 2016, when she resigned in order to endorse Sanders’ presidential campaign.

She said she endorsed Sanders at the time because he supported ending unnecessary wars.

“There is one main issue that is central to the rest, and that is the issue of war and peace,” Gabbard said on CNN when she announced her run for office in January.

“The last time Congress officially declared war was Dec. 8, 1941, the day that the United States entered World War II,” she said at a news conference. “Ever since, Congress has failed to uphold this constitutional responsibility and has ceded this power to the president ― presidents of both parties.”

Gabbard, who has spoken out against “interventionist wars” in the past, was heavily criticized for a 2017 meeting with Assad on what her office called a “fact-finding” mission. She said had not initially planned to speak with Assad but “when the opportunity arose to meet with him, I did so,” because of the possibility of achieving peace, Gabbard told CNN’s Jake Tapper in 2017.

Assad was accused by the United States and its allies of using chemical weapons to attack civilians during Syria’s civil war. Gabbard, however, said she didn’t think there was enough evidence to hold Assad responsible then and still doesn’t now.

“I think that the evidence needs to be gathered, and, as I have said before, if there is evidence that he has committed war crimes, he should be prosecuted as such,” Gabbard said at a CNN town hall in March.

She also came under fire for her former anti-LGBTQ views. Gabbard worked with her father at The Alliance for Traditional Marriage, a political action committee aimed at opposing lawmakers and legislation that promoted gay rights.

However, Gabbard reversed her public position on LGBTQ rights.

She said she regretted the views she previously held and noted her recent support of LGBTQ legislation. “I’m grateful for those in the LGBTQ+ community who have shared their aloha with me throughout my personal journey,” she said in January.

Gabbard took a progressive stance on most other issues.

She supported transitioning to 100% renewable energy. She wanted to get rid of tuition and fees at four-year public universities, and she supported free community college for everyone. She also advocated for raising the federal minimum wage to $15.

“There are a lot of challenges that are facing the American people that I’m concerned about and that I want to help solve,” she told CNN.