Whitehaven Coal chairman and former Nationals leader Mark Vaile says this year’s global energy crisis is a stark reminder that investment in fossil fuels needs to continue for decades, even as Australia and other countries target net-zero emissions.

Days after the federal Nationals agreed to support a policy of net-zero emissions by 2050, Mr Vaile said he recognised the “changing landscape” and growing momentum globally to achieve the 2015 Paris Agreement’s goals to limit the planet’s heating to below 2 degrees. 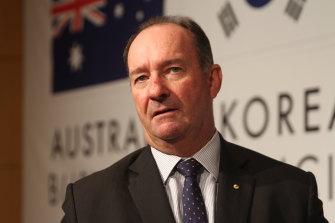 “Responding to the challenge of climate change continues to preoccupy governments and policy-makers globally, particularly on the eve of the COP26 Summit in Glasgow,” Mr Vaile, who served as Australia’s deputy prime minister from 2005 to 2007, told a Whitehaven investor meeting.

Burning coal to generate electricity represents one of the biggest hurdles to achieving “net-zero” emissions targets, under which countries are vowing to eliminate or offset the greenhouse gases they release into the atmosphere.

However, as a crippling shortage of coal, oil and gas across Europe and Asia sends energy prices soaring and causes power outages in China, Mr Vaile said it was clear that the challenges of addressing climate change and global energy trends would occur “over decades, not years”.

“The current global energy crunch, while reflecting a wide range of factors, also demonstrates the risks of under-investment in sectors that will remain vital to economic growth and social development as the world undertakes the multi-decade energy transition,” he said.

“In a more carbon-conscious world that will need more energy to support growth, we see a role for high-quality coal being used in tandem with advanced generation technology to deliver improved emissions outcomes.”

Producers of coal, Australia’s second-largest export, have been under mounting pressure as rising concerns about the fossil fuel’s enormous contribution to global warming cause investors and financial institutions to abandon the sector, pushing the cost of capital higher and restricting the ability to fund new projects.

An international push for countries to phase out coal-fired electricity by 2030-40 has also been building ahead of next month’s COP26 climate summit. United Nations Secretary-General Antonio Guterres has described coal as a “deadly addiction,” while COP26 president Alok Sharma is calling on leaders to “consign coal to history”.

But in a sign of the fossil fuel’s enduring near-term demand, coal prices have hit new peaks in recent months on the back of a sharper-than-expected post-pandemic rebound in economic and industrial activity colliding with global supply shortages.

High-quality thermal coal at the Port of Newcastle, the benchmark in Asia, fetched on average $US167 a tonne in the September quarter, according to Whitehaven, up from $US52 during the same period last year. More recently, the benchmark has soared to record highs beyond $US200 a tonne.

Coal’s long-term future is less certain and depends largely on how aggressively countries seek to decarbonise. Following a 2050 net-zero pledge by major coal consumers Japan and South Korea, modelling by the Reserve Bank has calculated that Australia’s coal exports could collapse by up to 80 per cent by 2050 under scenarios in which global temperature rises are kept below 2 degrees.

Mr Vaile told investors on Wednesday that Whitehaven’s coal, with a relatively high quality and energy content, was headed for a brighter future than coal from other countries, as Asian nations retired their older, less-efficient coal generators and move towards lower-emissions facilities.