VC Matt Murphy describes how he hustled to win Vivun's $35 million Series B round, after losing the Series A by just hours

For all the hype around being a venture capitalist, Menlo Ventures investor Matt Murphy says his job is usually pretty grueling. He spends much of his day sifting through an inbox which includes lots of mediocre funding rounds and entrepreneurs he’s not all that excited about.

But there are those moments in Murphy’s career when he gets so excited about a founder that all the boring stuff that comes with his job suddenly becomes worth it.

He got that rare feeling last year when he met Matt Darrow, the co-founder and CEO of enterprise startup Vivun.

The two first hopped on a Zoom call in August, a few weeks after a junior investor at Menlo Ventures, Grace Ge, found the company and pitched it to Murphy.

On the call, Darrow explained Vivun’s product to Murphy: a technology that helps companies keep better track of their data in pre-sales, or the set of activities businesses carry out to determine what customers want in their products or services.

After some initial research, Murphy knew that the company would be a good investment. And so, even during a pandemic, he met Darrow for a coffee chat at a local Peet’s in San Mateo, hoping to charm the founder into making Menlo his lead investor for Vivun’s Series A financing.

That meeting occurred on a Friday, and Murphy told Darrow he wanted to finalize a term sheet for the startup the next Monday.

But another investor, Accel’s Steve Loughlin, was also courting Darrow. Loughlin scheduled a full partners meeting on Saturday and signed a term sheet for Vivun’s Series A round that night, beating Murphy out to lead the deal in just a matter of hours.

Accel ended up leading the startup’s $18 million Series A round at a $64 million valuation last October. And Murphy came up empty-handed, without even a single share in Vivun.

Losing out on close deals happens to even the best investors. Most of the time, they stay in touch and then try again when the startup raises another funding round, even if that’s a few years away.

But Murphy refused to believe that would become his fate. Not having a stake in a company he believed would become worth billions of dollars “haunted” him for days on end, he told Insider.

“There aren’t that many times in your career where you feel this gnaw and this itch, where you can’t just let things sit that way,” he said. 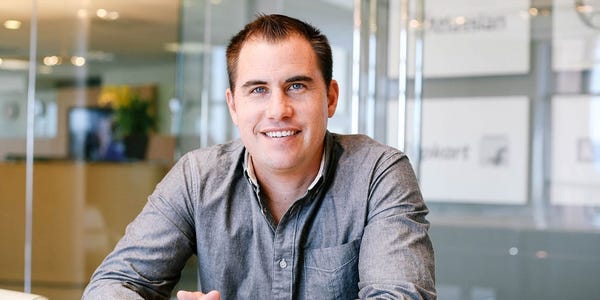 Thai food to win the Series B

Murphy determined he would to lead Vivun’s Series B round right away, even though the startup had just finished a massive fundraising haul.

The investor knew it would be a tough sell.

Fast, follow-on rounds of financing can pose big risks for founders. The immediate leap in a valuation can ramp up pressure for startups to scale too fast to prove they were worth the money. So much cash in the bank also removes fiscal constraints from a young startup  And if they burn through the money and don’t achieve big growth, raising future rounds can become difficult.

So Murphy took a more old-fashioned approach to wooing Darrow and Vivun’s other cofounders, Claire Bruce, Dominique Darrow, John Bruce, and Joseph Miller. He invited all of them to lunch at Farmhouse Kitchen, a luxurious, Thai waterfront restaurant in Oakland, in early December.

At the restaurant, Murphy didn’t spend much time talking about the business. Instead, he made sure the conversation struck a more personal note, and he shared his life experiences and values with the team.

That approach paid off: Vivun’s founders liked Murphy so much from that lunch that they agreed to let Menlo Ventures lead a Series B round for the company, even though they didn’t need the additional capital.

“They hadn’t even touched the Series A capital,” Murphy said. “So I was really grateful that Matt [Darrow] wanted to try to compromise as well.”

After a few weeks of negotiating the valuation and nailing down other investors with Murphy, Vivun closed a $35 million Series B, led by Menlo Ventures, earlier this month. Existing backers Accel and Unusual Ventures participated in the fundraising, as did Salesforce Ventures and Atlassian Ventures.

Murphy, for his part, is confident that Vivun’s business, and the pre-sales market, will take off.

“It’s not an area that people have spent a lot of time thinking about,” Murphy said. “And that’s why the category’s wide open in there for the taking.”