Walmart says it contacted Kanye West's Yeezy brand 5 times over a logo dispute, but never got a 'conclusive' response

Walmart’s logo battle with Kanye West’s Yeezy brand went viral this week, but according to Walmart the saga has been going on for months.

In a letter shared with CNN, Walmart said that it contacted Yeezy five times, starting in the summer of 2020, before complaining to the US Patent and Trademark Office earlier this month. CNN’s report did not say who Walmart sent the letter to.

In the complaint, which was first reported by Bloomberg, Walmart said Yeezy’s proposed new logo was too similar to its own, and that this could confuse customers and “create a false affiliation” between Walmart and Yeezy, damaging Walmart’s “goodwill.”

A spokesperson for Yeezy did not immediately respond to Insider’s request for comment.

Walmart told CNN it contacted Yeezy twice in the summer of 2020, and again in the first three months of this year, but didn’t get “conclusive information” back. It then filed the complaint.

“To date, we have not received any conclusive information from Yeezy regarding the planned use or any cooperation from Yeezy in order to find common ground,” Walmart said in a letter shared with CNN.

A spokesperson for Walmart was not immediately available to comment when contacted by Insider. 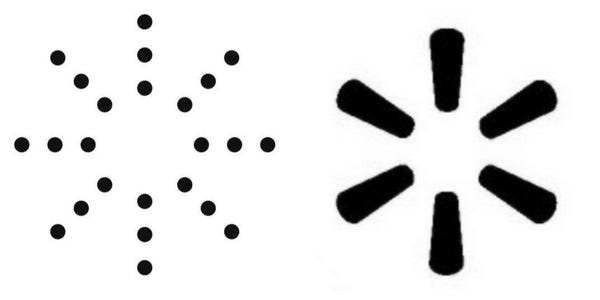 Walmart’s logo, on the right, which was rolled out in 2007, is a star-like pattern of six solid spokes with rounded ends. Meanwhile, Yeezy’s proposed logo, on the left, has a similar star-like shape but is made up of eight dotted spokes.