Takeover target Australian Pharmaceutical Industries’ (API) shareholders are holding out hope that retail powerhouse Wesfarmers will return to the table with a higher offer after having its initial bid rejected by the company’s board.

API, which owns the Priceline pharmacy chain along with a range of skincare clinics, knocked back Wesfarmers’ surprise $687 billion takeover bid on Thursday, telling the Perth-based conglomerate to come back with an offer that appropriately valued the business. 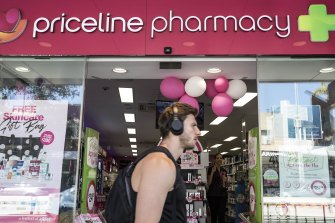 Wesfarmers, which owns retail chains such as Bunnings and Kmart, first announced its desire to acquire API two weeks ago, offering an unsolicited $1.38-a-share deal in a move to kick off the company’s foray into the healthcare and pharmaceuticals space.

At the time, analysts and shareholders suspected the bid was opportunistic and did not reflect the true value of API – a view the board agrees with, telling shareholders a detailed analysis of API’s underlying value had found the offer was too low and “not compelling”.

API said the bid was “opportunistic” in its timing of the offer given API’s weak performance in light of recent COVID lockdowns, and pointed to a predicted improvement in trading performance as conditions improve. It also noted the “strategic value” of the company’s Sister Club loyalty program. Wesfarmers has a significant loyalty operation through its part ownership of Flybuys.

“The board will only progress a change of control transaction on terms that recognise the fundamental value of API and are in the best interests of API shareholders as a whole,” the company said. Shareholders were told to take no action.

Simon Conn, portfolio manager at API shareholder Investors Mutual, said he thought it likely Wesfarmers would come back with a higher offer.

“The response today from the board shows that they think there’s more value there,” he said. “And now it’s a matter of sitting down with Wesfarmers and working out a path forward to try and encourage them to see where the value is.”

Similarly deputy head of investments at Van Eck, Jamie Hannah, agreed that another bid was likely on the way from Wesfarmers if the retailer was serious about its acquisition.

“Wesfarmers will have to go back to the drawing board and assess the cash flow and whether or not they really want to go into the healthcare space in this way,” he said.

A spokesperson for the Wesfarmers said the company was still considering the API announcement but noted it “continues to believe the Wesfarmers offer is compelling for API shareholders”.

But Wesfarmers may not be the only party interested in the pharmacy operator, Mr Conn says. The fund manager believes another company could also lob a bid for either the entire API business or just part of it.

“There could be an acquirer who is willing to pay a higher price than maybe what Wesfarmers was offering for just part of the business,” he said. “It depends how you extract the value.”

“But it’s clear there’s an auction that’s been started and it’s now up to the board to get maximum value for shareholders.”