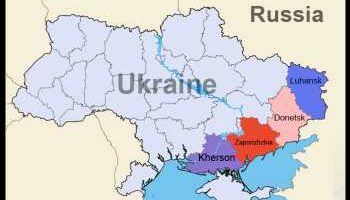 The United States and the European Union have announced that they will impose fresh sanctions on Russia over what are termed “sham” referendums in four occupied Ukrainian regions.

The White House slammed these referenda, saying that they are illegitimate and outrageous.

Press Secretary Karine Jean-Pierre said in a Press Briefing that Washington expects Russia to use these “sham referenda” as a false pretext to try to annex Ukrainian territory in flagrant violation of international law and the United Nations Charter.

She made it clear that the U.S. Government will never recognize these illegal and illegitimate attempts at annexation.

“In response, we will work with our allies and partners to impose additional economic costs on Russia and individuals and entities inside and outside of Russia that provide support to this action,” Jean-Pierre told reporters.

Washington will rally global opposition to Russia’s attempts at annexation, including at the United Nations, she added.

Separately, the State Department said it will impose more sanctions on Russia in the coming days over its referendums in occupied areas of Ukraine.

“We will continue to work with allies and partners to bring even more pressure on Russia and the individuals and entities that are helping support its attempted land grab,” State Department spokesman Ned Price says.

European Commission President Ursula von der Leyen said, “We do not accept the sham referenda nor any kind of annexation in Ukraine, and we are determined to make the Kremlin pay the price for this further escalation.”