What Is the Stafford Act? Despite Text-Message Hoax, It's Not a Plan for National Quarantine

When President Trump declared a national emergency over COVID-19 last Friday, he did so under the National Emergencies Act, which was also cited in his national emergency ruse to fund the border wall last February, and the Stafford Act, a 1988 disaster relief law that allows the government to funnel the resources of the Federal Emergency Management Agency to states and cities.

The president demonstrated his air-tight grasp of the nuances of the Stafford Act the previous day while speaking with reporters. “We have very strong emergency powers under the Stafford Act,” he said. “I have it memorized, practically, as to the powers in that act. And if I need to do something, I’ll do it. I have the right to do a lot of things that people don’t even know about.”

Beyond the president’s ramblings, the Stafford Act may have found its way into your text messages or social media over the weekend as part of a viral warning about a potential national quarantine. The hoax text massage probably looked something like this: 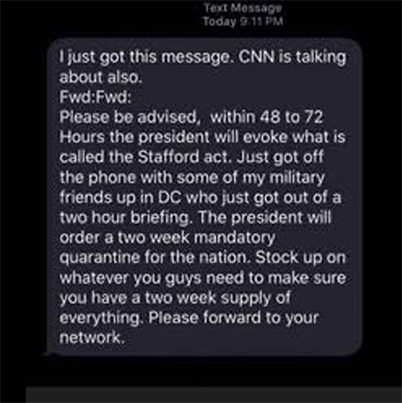 If the message seems suspicious, it’s because it’s a hoax. The National Security Council tweeted on Sunday night that rumors of a national lockdown are “FAKE.”

Though Trump may not be gearing up to declare a national two-week lockdown, the Robert T. Stafford Disaster Relief and Emergency Assistance Act of 1988 is very real. It essentially allows FEMA — which you may remember from such Trump-era disasters as Hurricane Maria and the California wildfires — to directly assist state and local governments by tapping into a $50 billion fund earmarked for disaster relief.

The Stafford Act is used often and for a variety of purposes. Prior to Friday, Trump had made hundreds of individual Stafford Act declarations to bolster assistance for hurricanes, wildfires, flooding, and more. But the act is rarely used for infectious diseases. President Clinton invoked it in 2000 to help combat outbreaks of the West Nile virus in New York and New Jersey. During the H1N1 pandemic in 2009, however, President Obama relied solely on the National Emergencies Act, which gives the executive branch broad power to exercise control over federal agencies combating the emergency in question.

Considering the scope of the Stafford Act pertains specifically to FEMA, it’s unclear what Trump may have been referring to last Thursday when he boasted that it affords him the “right to do a lot of things that people don’t even know about.” It’s possible that, as he’s done often during the coronavirus threat, Trump is just randomly saying self-aggrandizing things that spark panic.

What the Stafford Act definitely doesn’t do is give the president authority to declare a nationwide lockdown, which means you can safely disregard all of those warning text messages that supposedly came from a friend of a friend of a friend who works for the military.