“Let me say first that we have the highest ethical standards of any administration in history,” Psaki said, speaking in Trumpian superlative. “A number of ethics officials have conveyed that and we’re proud of that. We’ve also staffed up at an unprecedented pace and this is the most diverse administration in American history. So we certainly expect that everyone will abide by those high ethics standards. It applies in how we operate it also applies in how hiring is done.”

Psaki – whose sister was appointed a senior adviser in the Department of Health and Human Services in March, Fox News reported earlier this month – was not asked a follow-up question on the topic.

Psaki did acknowledge that her sister was hired by the administration in a tweet last week, saying that Stephanie Psaki “is more qualified than I am to be here.” 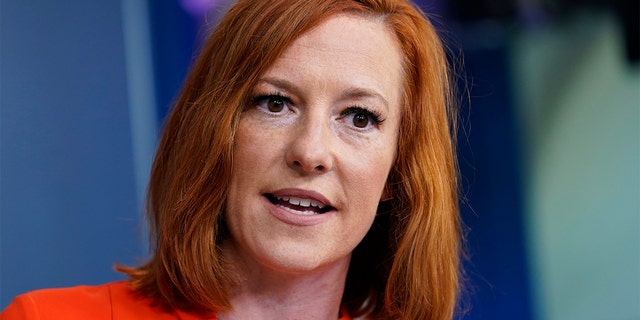 Other Biden officials whose family members got gigs with the administration include National Security Adviser Jake Sullivan, whose wife, brother and sister-in-law all work for the Justice Department, State Department, and Department of Health and Human Services, respectively.

Chief of Staff Ron Klain’s wife Monica Medina is the president’s nominee for assistant secretary of the Bureau of Oceans and International Environmental and Science Affairs.

In many cases these family members of the most senior administration officials have significant experience, including time in the Obama administration for some. But for others that is not necessarily the case, according to critics.

Walter Shaub, former President Barack Obama’s director of the United States Office of Government Ethics, slammed the fact that J.J. Ricchetti got hired as a special assistant in the office of legislative affairs despite having less experience than others who were hired with the same title.

J.J.’s father Steve Ricchetti is a counselor to the president.

Deputy Chief of Staff Bruce Reed’s daughter Julia Reed was recently hired as Biden’s day scheduler, according to Politico, which has also reported the hiring of other children of Biden officials.

White House spokesman Andrew Bates said in a statement earlier this month that “there is nothing wrong with hiring people who have strong credentials and qualifications and happen to be relatives of other staffers.”

But many have been highly critical of the administration nevertheless.

“EVEN THE F-ING HEAD OF PRESIDENTIAL PERSONNEL, WHO IS SUPPOSED TO BE KEEPING THEM HONEST, HAS A CHILD WHO’S A RECENT COLLEGE GRAD WORKING IN THE ADMINISTRATION. AND THE SPOUSE OF THE WHITE HOUSE CHIEF OF STAFF, FOR CRYING OUT LOUD,” Schaub said in a tweet.

Schaub was referencing Sarah Donilon, who is the daughter of Office of Presidential Personnel Director Cathy Russell.