For most of January, Google was locked in an almighty stand-off with the Australian government that captured the attention of the media and technology worlds. The $US1.6 trillion ($2 trillion) internet giant was fighting hard against new laws designed to force it to pay publishers for news content.

It launched a national advertising campaign against the legislation, warned users it would ruin their experience online and even threatened publicly to turn off its ubiquitous search engine in the country.

Now, barely five months on, the search giant is singing a different tune. And in his first public comments on the matter, the company’s global chief executive Sundar Pichai has even expressed a degree of support for the government’s contentious media bargaining laws. 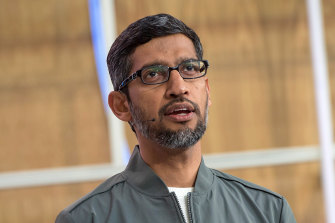 “I had conversations both with the Prime Minister and the Treasurer and we took their feedback and worked hard to get to the right construct,” Mr Pichai told The Sydney Morning Herald and The Age.

“I think it is important we support publishers and I think the new law allows for that.”

The changed tune perhaps reflects the late concessions made by the government to get Google to strike deals with media companies. Or maybe it has more to do with the fact that Pichai and Google are facing sterner regulatory challenges in even bigger markets at the moment. Either way, the conciliatory tone is striking, and could serve Google well as it faces a raft of new challenges.

“We had concerns around making sure that free interlinked internet can work as is while supporting a way to license content from publishers,” he says. “I think there were improvements across all aspects for all the parties involved that helped to arrive at the right outcome.”

Google is facing multiple government lawsuits in its home market of the United States that accuse it of unfairly dominating the internet and could see its sprawling operations forcibly broken apart. German regulators this week launched two proceedings against the company, accusing it of engaging in anti-competitive behaviour. Meanwhile in India, where Pichai was born, Google and other digital giants are facing tough new rules that would force them to, among other things, beef up compliance and respond more quickly to government requests for data.

Pichai indicated Google would work with the Indian government on those laws, in contrast with Facebook’s WhatsApp which is fighting them in court.

To an extent, this echoes how the digital giants approached Australia’s media bargaining code: Google fought the laws hard, but Pichai’s talks with the government were widely considered constructive. And after securing the concessions it moved quickly to strike deals with a range of publishers (including Nine Entertainment, owner of this masthead).

In contrast, Facebook continued to fight, and even turned off news completely in Australia. That step inadvertently resulted in it blocking pages operated by public health agencies and emergency departments during the middle of a global pandemic. It led to widespread condemnation of the social media giant.

As things stand Google has signed binding contracts with News Corp Australia (owner of The Australian, The Daily Telegraph and The Herald Sun) and Seven West Media, as well as letters of intent with Nine, Guardian Australia and the ABC.

Whether the Australian laws, which force Google and Facebook into negotiations with media companies for use of their content, do end up being copied in other markets remains to be seen. But surprisingly, Pichai seems relatively comfortable with that.

Breaking the mould on WFH

Yet regulation is far from the only thing on Pichai’s mind at the moment.

Running a company with 135,000 staff in more than 100 countries during a global pandemic is no easy task. Particularly for a company like Google, which has forged such a distinctive internal culture.

While some technology companies (most notably Australia’s Atlassian) are going all in on remote work, Pichai has made no secret of his desire to see staff return to offices where possible, and indicates Google will settle on more of a hybrid model.

He expects about 60 per cent of the company’s workforce to continue to work in their existing offices about three days a week. Another 20 per cent, he expects, will move to new locations for lifestyle reasons but still come into their nearest offices on a regular basis. That leaves it with 20 per cent of staff who will work remotely. It’s a lower proportion than other tech companies, but pretty high when you consider how much effort Google has put into its physical offices, which famously feature extensive facilities and perks.

“We definitely valued over the past 20 years creating a strong workplace where people come. It’s creative, fun, creates a sense of community and helps people collaborate to achieve impact,” he says. “We value that and I think that will be an integral part in the future too, but I would say it will be more purposeful.

“We are redoing our campuses with that model in mind. We are fortunate as a company to be present in over 100 countries so I think we can give people more choice and locations. It gives us a chance in terms of tapping into a more diverse workforce over time, you know, gaining access to pools of talent around the world, which is otherwise difficult to do. And, and so I view it as an opportunity, and I’m excited by it.”

“People don’t think of using search. They are thinking ‘I want to buy something’ – they may come to Google, they may go to Amazon or any other site. Users choose Google because they know we built a product of value and we also see how much it benefits the economy.

“We’ll make our case and we’ll engage but at the same time we’ll approach it constructively. I strongly believe our products and services contribute significantly to people and society.”