Why there is skepticism surrounding video game 'addiction'

More than 100 Activision Blizzard employees staged a walkout on Tuesday calling for Kotick to step down as CEO, according to the group organizing it. The walkout came in response to a Wall Street Journal investigation published earlier in the day, which cited internal company documents and people familiar with the matter indicating that Kotick was aware of those issues for several years.
In a video message to employees on Tuesday that was transcribed and posted on the company’s website, Kotick claimed that the Journal story “paints an inaccurate and misleading view of our company, of me personally, and my leadership.” He added that “anyone who doubts my conviction to be the most welcoming, inclusive workplace doesn’t really appreciate how important this is to me.”

While the report prompted renewed tension with some employees, Activision Blizzard’s board of directors reiterated its support of Kotick. “The Board remains confident in Bobby Kotick’s leadership, commitment and ability” to address the company’s longstanding and ongoing issues with harassment and discrimination, it said in a statement Tuesday.

In a statement, the organizers behind the walkout said: “The board is just as complicit if they let this slide. It’s past time for Bobby to step down.”

Activision Blizzard (ATVI) — which owns hugely popular titles such as “Call of Duty,” “World of Warcraft” and “Candy Crush” — has been roiled by a sexual harassment and discrimination scandal for months and is currently under scrutiny from multiple government agencies.
A lawsuit filed in July by California’s Department of Fair Employment and Housing alleged a “frat boy” work culture where women were subjected to constant discrimination and harassment. (The company told CNN at the time that it had addressed past misconduct and criticized the lawsuit as “inaccurate” and “distorted.”)
The lawsuit and the company’s initial response kicked off a storm of dissent from Activision Blizzard’s workforce that ultimately led to hundreds of employees staging a walkout at the company’s offices in Irvine, California. Kotick subsequently acknowledged that the company’s initial response was “tone deaf.”
The company is also facing a complaint from the National Labor Relations Board filed in September accusing it of unfair labor practices, as well as an investigation by the Securities and Exchange Commission that the company has said it is cooperating with. Those actions are all still pending, and Activision Blizzard said it “continues to productively engage with regulators.” 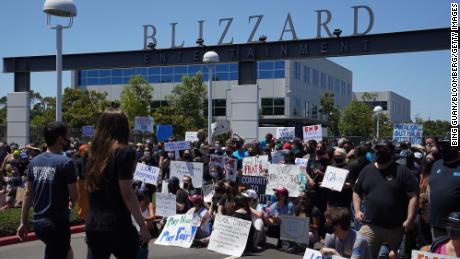 The company also paid $18 million to settle a separate lawsuit by the Equal Employment Opportunity Commission (EEOC) that accused it of subjecting female employees to sexual harassment, retaliating against them for complaining about harassment, and paying female employees less than male employees. The company also “discriminated against employees due to their pregnancy,” the EEOC alleged.
In a statement accompanying the EEOC settlement announcement, Kotick said he remained “unwavering in my commitment to make Activision Blizzard one of the world’s most inclusive, respected, and respectful workplaces.”

Kotick, who has been Activision CEO since 1991, including at the time of the 2008 merger with Blizzard, has been in damage control mode for most of this year.
Last month, he announced an intention to slash his controversial $155 million pay package — one of the largest in corporate America — to the “lowest amount California law will allow” until the gaming company fixes its issues with gender discrimination and harassment. If the board approves, Kotick will be paid $62,500, he said.
Source: Read Full Article