Woman sues Kellogg for $6.7m over lack of strawberries in Pop-Tarts

A woman is seeking $US5 million ($6.7 million) from Kellogg, accusing the popular cereal maker of misleading customers into thinking its strawberry Pop-Tarts contain more strawberries than they actually do.

It’s among a wave of lawsuits alleging Big Food is labelling its products in ways that make them seem healthier than they are, as consumers show greater interest in knowing where their food comes from and how it is made.

The suit, filed on October 19 in the Southern District of New York, is the latest in a series of class-action suits against Kellogg Sales for variations of the same allegation, namely that it misrepresents the ingredients of Strawberry Pop-Tarts in marketing and packaging to sell them at a premium price. 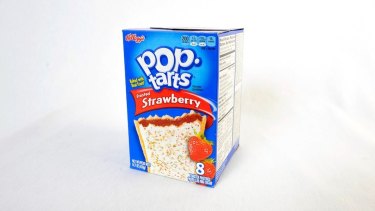 In a statement to The Washington Post, a Kellogg spokesperson said the company does not comment on pending litigation, and that “the ingredients in and labelling of all of our Pop-Tart products fully comply with all legal requirements”.

The plaintiff, Elizabeth Russett of Dutchess County in New York, demanded a jury trial and $US5 million in compensation under the Class Action Fairness Act. She is represented by attorney Spencer Sheehan of Sheehan & Associates, the same firm that is representing another plaintiff in New York and one in Illinois who also accuse Kellogg of misleading them into thinking Strawberry Pop-Tarts contain more strawberries than they actually do.

Sheehan is known to frequently file lawsuits against major food companies. Law Street Media, a legal news service owned by legal software provider Fastcase, analysed fraud cases filed in the United States since 2019 and found that Sheehan filed two to three fraud suits per week on average in the first few months of 2021. His firm filed the most food-related fraud lawsuits in federal courts of any firm in the last two years, according to Law Street. Sheehan told the publication, “I lose a lot more than most people.”

The complaint alleges that the company charges a higher price that consumers would likely refuse to pay if they knew how few strawberries were in the Pop-Tarts, citing data from the United States Department of Agriculture which shows that strawberries are almost 50 per cent more expensive than pears.

“Strawberries are the world’s most popular berry fruit,” the complaint states, adding that Russett, the plaintiff in the case, “likes strawberries for the same reason they are America’s number one berry fruit.”

The complaint focuses on Whole Grain Strawberry Pop-Tarts because it argues that for health-conscious consumers seeking to add more fibre to their diet, the product label’s “relatively truthful ‘whole grain’ statements create expectations that other statements will be truthful,” namely that the product contains mostly strawberries.

Consumers’ expectations about what is in their food are changing as public concerns grow over animal welfare and the environmental impact of agriculture – and as more becomes known about how what we eat impacts our health.

Advocates for greater transparency say there is a regulatory vacuum in the United States when it comes to food marketing – something the US Congress and the Biden administration are attempting to change through new legislation and by funding the Food and Drug Administration.

Former first lady Michelle Obama was an outspoken advocate for healthier eating and helped lead the charge to overhaul nutritional food labels in the United States.

During the pandemic, the FDA temporarily loosened some of those rules to ease food supply chain bottlenecks.

Sheehan told the Wall Street Journal he wants Kellogg to change its labelling.

“Nobody’s saying that you expected to get everything from a strawberry. You’re not eating a fresh strawberry, obviously,” Sheehan told the Journal. “But if you’re going to call it strawberry, you either ought to have all strawberries in there or just call it something else.”