Online health startup Eucalyptus has locked in a $30 million funding round from a bevy of high-profile US and Australian investors as the company sets its sights on becoming a digital super clinic for healthcare brands.

Eucalyptus is a three-year-old startup based in Sydney that builds and launches digital consumer products. It has four offerings in the market: men’s health brand Pilot, women’s fertility and telehealth service Kin, skincare brand Software and sexual wellness company Normal. 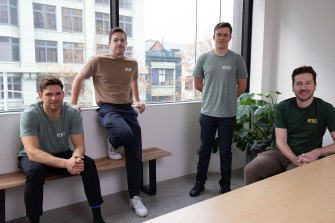 The fresh round of funding is the third for the company and its four founders Benny Kleist, Alexey Mitko, Charlie Gearside and Tim Doyle, with supermarket giant Woolworths joining an $8 million Series A in May last year alongside local venture capital powerhouse Blackbird.

Both groups have invested again as part of the $30 million Series B, which has been led by San Francisco-based venture capital firm NewView Capital. Australian firms Airtree Capital and OneVentures have also invested.

Mr Doyle told The Age and The Sydney Morning Herald the major jump in funding – from $8 million to $30 million – reflects the business’ booming growth over the past 12 months, with revenue increasing fourfold.

“We’ve got over 200,000 customers now with four brands, and we’ve got plans for new brands to move deeper into the healthcare stack,” he said. “[Those brands] are just the starting point for a digitally-first healthcare system.”

Eucalyptus’ next step is to grow into a digital super clinic of sorts, offering online-first solutions for a number of common health problems. Mr Doyle says the business is set to launch a brand focused on diabetes and weight management in the coming months, and has plans for services covering mental health and menopause.

“We want to step into the big healthcare challenges facing Australia and the Western world in general. The vision is to try to serve as many patients for as much of their healthcare journey as possible,” he said.

Christina Fa, principal at NewView and a former analyst at UBS in Sydney, said the US fund was attracted to Eucalyptus’ speedy growth in Australia and the calibre of the startup’s team. “The team has an incredible clarity of vision and supreme execution, and the people they’ve managed to get together are really,, really spectacular,” she said.

NewView is also bullish on Eucalyptus’ potential for growth in overseas markets such as Asia, with Ms Fa noting there was a history of large Australian healthcare companies that had moved into Asian markets and done very well.

Mr Doyle said some of the company’s brands would be suited to international growth and others wouldn’t, but agreed there was an opportunity to leverage Australia’s reputation as a leading provider of healthcare.

“A decade ago, we saw the first versions of that with Swisse and Blackmores, but as we build sophistication over time, there are opportunities to do a whole lot of other interesting ways,” he said. “And we want to be among the first movers in that space.”